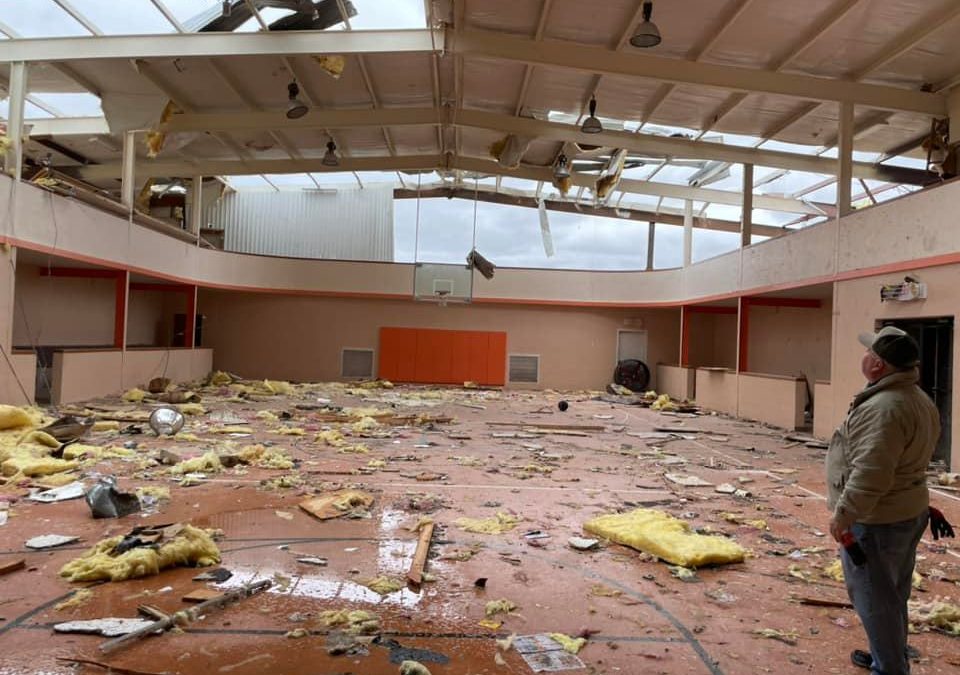 Above: Pastor Keith Rogers of Kingston, Texoma Southern stands in the church’s family life center after the March 21 tornado damaged the building.

KINGSTON—Keith Rogers has served as pastor in the Texoma area for more than 15 years. On the evening of March 21, the church where he serves—Kingston, Texoma Southern and the adjacent parsonage where he lives—took a direct and devastating hit from a tornado. 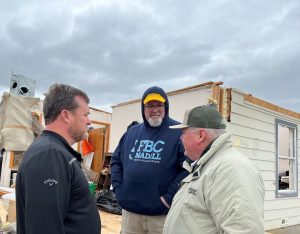 From left Todd Fisher, executive director-treasurer of Oklahoma Baptists, and Gary Dempsey, director of missions in Johnston-Marshall Association, meet with Rogers at the parsonage at Kingston, Texoma Southern.

In a recent interview with KWTV News 9, Rogers recalled the harrowing experience and how the Lord took care of them in the perilous moments of the tornado.

“We noticed the wind picked up, and then it really picked up very quickly,” Rogers said.

“Pastor Keith as he’s known to the community said he and his wife Cindy ran for the bathroom as they heard the tornado roar,” the TV reporter announced.

“The glass was flying and everything, and within 20 seconds, the roof was gone,” Rogers said. “We knew it was going to be bad, but I’ll say this, the good Lord took care of us.” 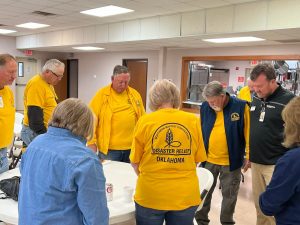 “The parsonage (Rogers) calls home was destroyed,” the TV reporter said, “the 50-year-old church was shredded with debris thrown for hundreds of yards. (Rogers) said, within minutes, people began showing up to lend a hand.”

Todd Fisher, executive director-treasurer of Oklahoma Baptists, met with Rogers at the site of the church and parsonage the day after the storm.

“I am so grateful the Lord protected Keith and his wife Cindy who were in the parsonage when the tornado hit,” Fisher said. “Also I am grateful for the fast response of our Oklahoma Baptist Disaster Relief teams, already on the scene removing debris and providing meals. These are some of the best people on the planet.”

Through the gifts given to Oklahoma Baptist Disaster Relief, teams will be equipped to serve the Kingston and Madill areas, which were hard hit. Also, direct financial assistance will be made available to Texoma Southern and others who were impacted by the tornado.

In an appeal to Oklahoma Baptists, Fisher said, “Please pray for all the people who have lost so much in this storm and consider giving to our Disaster Relief.”

To make a tax-deductible donation to Disaster Relief, go to okdisasterhelp.org/donate.