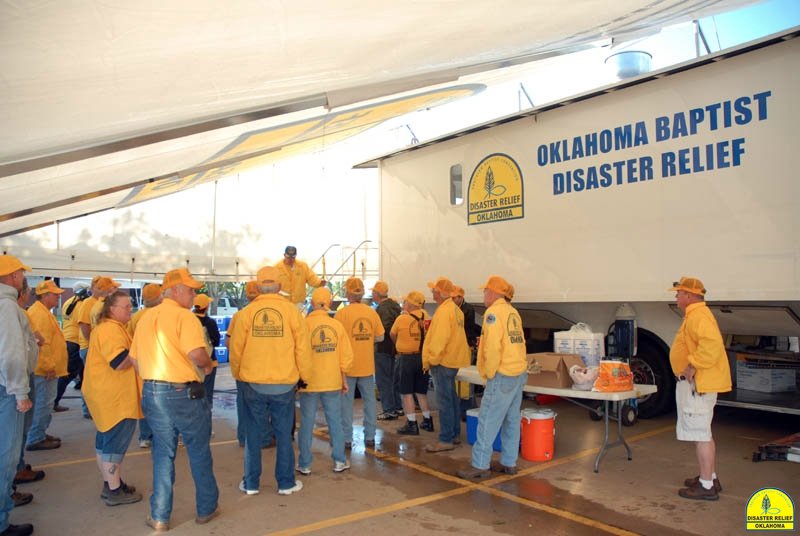 OKLAHOMA – The Baptist General Convention of Oklahoma’s (BGCO) Disaster Relief Team is once again responding to service needs in Colorado. A BGCO mobile kitchen and support truck will leave for Longmont, Colo. on Saturday, Sept. 14 and will be providing meals to area residents displaced by the recent flooding.

The BGCO employs a fleet of 17 standardized mobile kitchens that are housed in 8-by-20 foot trailers. The kitchen is staffed with a 20-person volunteer team, and with the help of the support truck, will be equipped to provide up to 8,000 meals daily. Jim Coffey of Elk City, Okla. will be leading the team in Colorado.

“Our plan is to get to Colorado and be a source of support for these people,” Coffey said. “We want to provide them a warm meal, but more importantly we want to encourage them and let them know we care.”

Longmont, Colo. is located at the base of Estes Park, which has received more than 15 inches of rain in the past two days, according to the National Weather Service. Thousands of residents have been evacuated from their homes, and six Colorado counties have been declared national disaster areas by President Obama. In addition to standing and rushing water, the flooding has caused rock slides, which in turn have resulted in extensive road closures throughout central Colorado.

“This is another situation where our disaster relief team is doing what it was created to do,” said Disaster Relief Coordinator Sam Porter. “We are honored to have the opportunity to once again serve people who are in need of help, and to do it in the name of Christ.”

For more information about Oklahoma Baptists’ Disaster Relief Operation, or to make a tax-deductible gift, visitwww.okdisasterhelp.com.

About the Baptist General Convention of Oklahoma

The Baptist General Convention of Oklahoma (BGCO) consists of 1,800-plus Southern Baptist churches throughout the state. The mission of the BGCO is to assist the local church to fulfill its Biblical mission and be a channel for cooperative ministry in Oklahoma, the nation and the world.