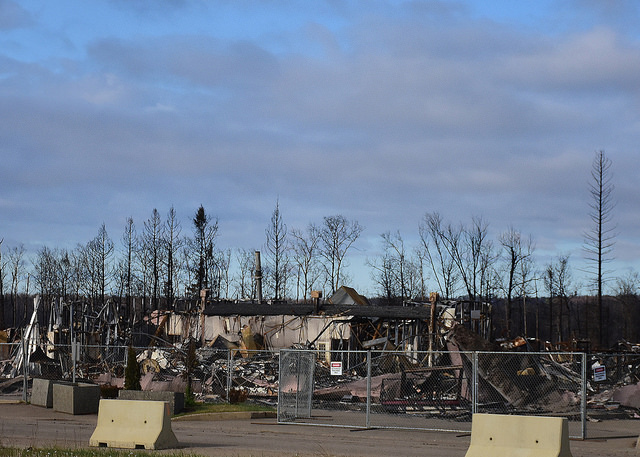 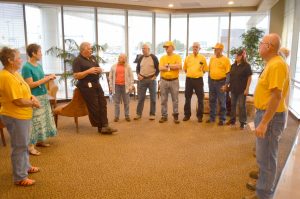 OKLAHOMA CITY—Baptist General Convention of Oklahoma (BGCO) Disaster Relief Director Sam Porter says BGCO DR volunteers have, “Been spread out from the North Pole to the Gulf of Mexico,” over the past several weeks.

Oklahoma Baptist DR volunteers have been dealing with the after effects of fire and rain, as teams have worked for almost a month assisting homeowners in the far northern part of the Canadian Province of Alberta after a devastating wildfire and more recently helping owners of flooded homes in the city of Rosenberg in Southeast Texas and at home in Lawton.

“We have 17 volunteers on the ground in Lawton today (June 21),” Porter said. “We have had 85 requests from homeowners to clean the mud out of their residences after eight inches of rain fell in the Lawton area on June 12.”

The BGCO DR volunteers are on site at Lawton, First East, 3302 S. Lee Blvd. In addition to the mud-out crew, the Union Association shower trailer and the Mullins Association feeding unit are on site, Porter said.

Prior to the Oklahoma floods, Oklahoma volunteers spent a week—June 11-18—in Rosenberg, Texas helping flood victims there before having to be called back to their home state to help.

In Fort McMurray, the BGCO is providing Blue Caps (Team Leaders) and chaplains as part of its ongoing response in reaching out to one of the Convention’s newest missions partners, the City of Edmonton.

Ten Blue Caps over the next month (Two groups of five in two-week stints each) are leading teams of up to 10 people—accompanied by chaplains—who will oversee individuals hired by the Canadian government to sort through debris created by the City of Fort McMurray bulldozing homes to create a fire break  back in May.

“These are homes that did not burn,” Porter said. “Samaritan’s Purse also is providing the same number of leaders in this process.”

Porter said the chaplains have an essential role as they will accompany the homeowners as the debris from their homes is gone through.

“All of this is being done under the umbrella of Canadian Global Response, which is their equivalent of our National Southern Baptist Disaster Relief,” Porter explained.

Oklahoma DR also has a feeding unit on site, and will be cooking the food for the volunteers. Samaritan’s Purse is providing the food to be cooked, Porter said.

“We are thankful for the many volunteers who have, and will, serve our neighbors to the north,” he said.

For information and updates, or to request assistance, visit www.okdisasterhelp.org.